The Red Coat –  book 1 in my Sophie Collins Mystery YA series just received another 5 star review.

Format: Kindle Edition
I received a free e-copy of this book in exchange for an honest review. 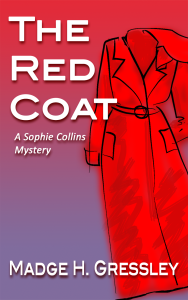 Sophie is certainly not Nancy Drew! Having learned some lessons while living on the streets, our edgy and bright protagonist is shrewd and rough around the edges. Sophie’s ethics are centered in the gray area; she’s a good kid, but she sometimes makes decisions that push the limits on what is considered to be ethical. I like this because it makes her more realistic as most teens tend to test the limits of ethical and unethical behavior.

The Red Coat strays from the typical goody-goody, know-it-all young sleuth novel to provide readers with a realistic, unique, and likeable protagonist. If you are an adult who misses reading Nancy Drew, or your pre-teen/younger teen is looking for an enjoyable mystery read; I recommend that you grab a copy of The Red Coat by Madge Gressley.